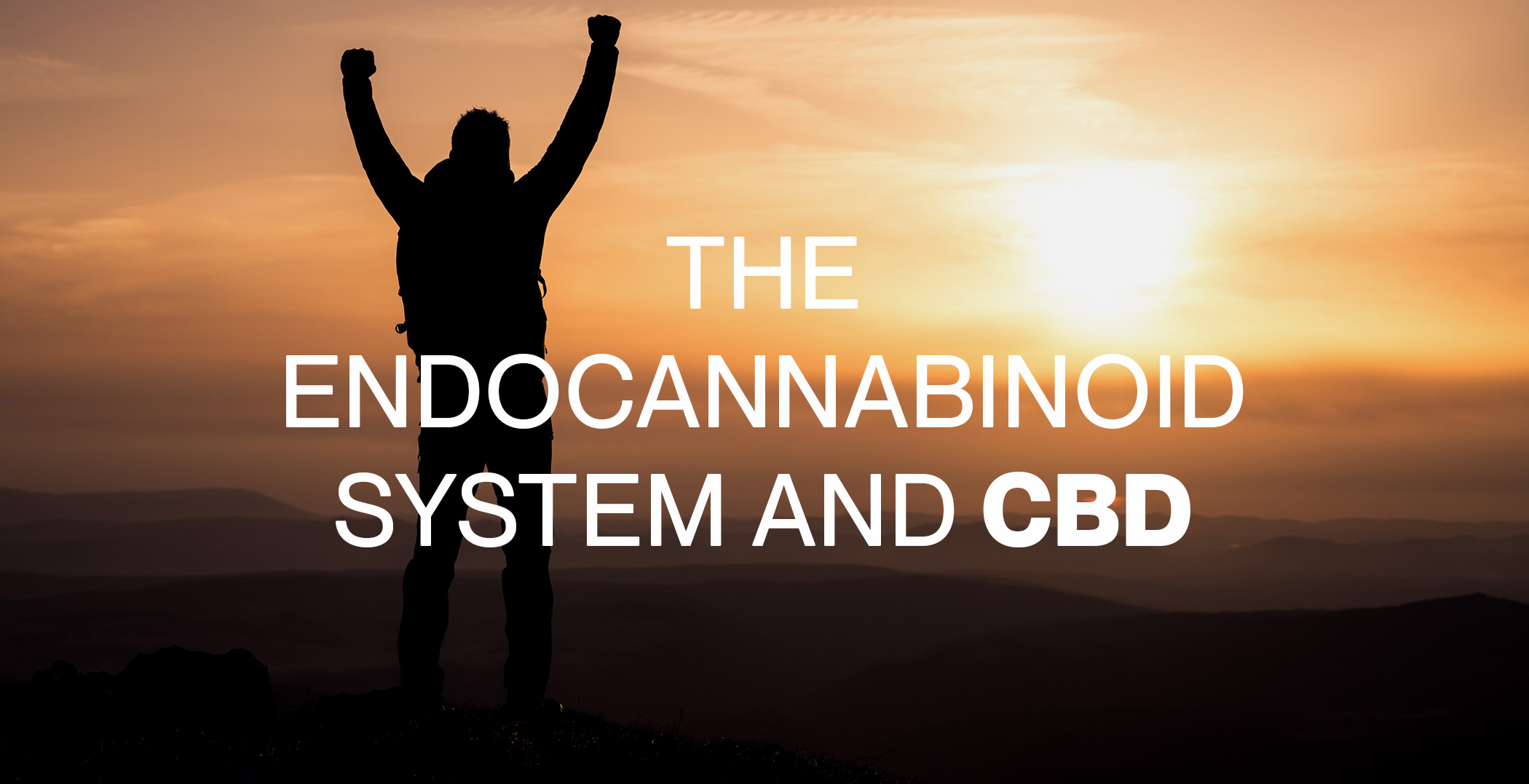 The Endocannabinoid System and CBD

Having spent the better part of the last two years immersed in learning about the endocannabinoid system (ECS) and CBD, I’ve gotten used to the quizzical looks I get from people when it comes up in conversation. Friends, many of whom work in medicine and science, often report that they are unfamiliar with the ECS. It’s not uncommon to hear something like, “the what system???”.

And I can relate – I studied the entire human body when doing my professional and graduate studies, and the ECS was never mentioned. Not even once.

How can this be? Well, it’s pretty simple. The ECS was only discovered relatively recently, and unlike most biological systems, it isn’t visible to the naked eye. Instead, the ECS is a system that we find on a molecular level, where it consists of molecules, receptors, and enzymes.

What are the three parts of the Endocannabinoid System?

However, we now know that the ECS is much more complex than initially thought. In 2013, the classical ECS was expanded to include additional endocannabinoid-like molecules, more receptors, and more enzymes. This expanded system is called the endocannabinoidome.

What does the Endocannabinoid System do?

The fundamental roles of the classical ECS and the endocannabinoidome are the same: adapt to stress, maintain homeostasis, regulate function, respond to stimuli, and fight disease. From looking at this list, it should be clear that the ECS plays one of the most important roles in the body, and that it has a profound impact on our ability to maintain our health and well-being.

The ECS is so important that Drs. George Kunos and Pal Pacher of the National Institutes of Health stated in 2013 that “modulating endocannabinoid system activity may have therapeutic potential in almost all diseases affecting humans.” Yes, you read that correctly: optimizing ECS health may alleviate almost ALL human diseases.

The ECS is found nearly everywhere in the body, including organs, blood vessels, connective tissue, and glands. The ECS has been the most well-studied in the immune system and the nervous system. In this article, we are going to focus primarily on the nervous system ECS. We will also look at how to support ECS health in the nervous system through the use of plants that interact with the Endocannabinoid receptors.

Neuroglia in the brain include astrocytes, microglial cells, ependymal cells, and oligodendrocytes. Microglia have recently been recognized as the immune cells of the brain and play a very important role in neurodegenerative and mental disorders.

Cells in the nervous system communicate with each other through electrical and chemical signals, with neurotransmitters carrying signals across synapses. Synapses consist of a pre-synaptic (or sending) neuron, and a post-synaptic (or receiving) neuron (the receiver can also be a muscle cell or a gland for synapses outside of the CNS).

Neurotransmitters can be either excitatory or inhibitory, depending on the chemical messenger, which determines whether a signal is increased or decreased as it travels through the nervous system. This ability to turn signals up or down is critical to proper physiological function, and a balance of excitation and inhibition is needed for optimal brain health. Imbalance between these two types of signals is linked to brain diseases like Alzheimer’s.

The ECS has been found to be distributed extensively throughout the Central Nervous System. For many years, it was thought that the brain only contained CB1 receptors, but we now know that there are also CB2 receptors there as well. CB2 receptors are found in lower concentrations than CB1 receptors, and they have different brain distributions.

This illustrates the ability of the ECS to maintain the balance, or homeostasis, between excitation and inhibition that is so important for brain health, which is why the ECS is being studied for its role in diseases like Alzheimer’s Disease and Parkinson’s Disease.

The peripheral nervous system (PNS) includes the cranial nerves (nerves of the head) and spinal nerves. The job of the PNS is to communicate information between the CNS and the rest of the body, with information traveling bidirectionally into and out of the CNS. The PNS consists of an autonomic and somatic division, with the somatic carrying motor and sensory information and the autonomic regulating involuntary bodily functions such as breathing and regulating body temperature. The PNS contains neurons and neuroglia.

As in the CNS, the ECS is extensively distributed throughout the PNS. The role and function of the ECS in peripheral neurons and glia are the same as in the CNS, where it regulates the process of neurotransmission. Through the ECS, the peripheral system is also associated with inflammation, mainly through CB2 receptors.

Pharmaceutical treatments for pain usually target the nervous system in some way. For example, opioids act in both the CNS and PNS, with effects on both the pre-and post-synaptic neurons. It is thought that their main mode of action is to reduce the number of neurotransmitters released from the presynaptic neuron, which is similar to the “pre-synaptic inhibition” we see with endocannabinoids. In fact, the ECS is increasingly being recognized as an important target in the management of pain, using both pharmaceutical and non-drug approaches.

However, THC has psychoactive effects that CBD does not have, making it more difficult to use on a regular basis. CBD and THC are called “phytocannabinoids” (phyto meaning plants). This contrasts with ANA and 2-AG, our endogenous cannabinoids.

The Endocannabinoid System and CBD are associated in several ways.

Studies in both animals and humans support the use of CBD in pain management. In animal models of human pain conditions, CBD has been shown to reduce the pain of arthritis and myofascial pain, leading researchers to conclude that there is an “overwhelming” body of pre-clinical (that is, non-human) research supporting the use of CBD for pain.

In humans, a 2022 systematic review concluded that CBD was helpful in the management of chronic pain. Another review focused on neuropathic pain concluded that CBD had a higher safety/efficacy profile to opioids, which are addictive. Although most studies focus on the oral ingestion of CBD, CBD oil applied topically to the skin has also been shown to reduce pain associated with peripheral neuropathy. The Endocannabinoid System and CBD are linked to reduce pain and help regulate pain through receptors in the brain.

CBD products come in many forms, including isolate, broad-spectrum, full-spectrum, and topical. Isolate and broad-spectrum products are supposed to be THC free, but you should always confirm this by looking at a product’s Certificate of Analysis (COA). For the treatment of pain, both oral and topical products can be used, depending on the pain type. Since topical CBD is not well absorbed past the skin, it will be only helpful in areas like arthritic joints or superficial muscles where there is not a lot of tissue

Other plants that contain phytocannabinoids that interact with the ECS include black pepper, ginger, carrots, Japanese liverwort, maca root, and kava kava. These have a variety of actions, including binding to cannabinoid receptors and inhibiting FAAH activity. These have not been well studied.

The Endocannabinoid System and CBD Summary

The endogenous cannabinoid system, or ECS, is one of the most important systems in the body. The ECS is a critical regulator of health and disease, and through its roles in the nervous system, it is implicated in the management of pain. Supporting the health of the ECS through the consumption of ECS activating plants, especially CBD, may be a safe and effective management strategy for people with different types of pain.

The contents in this blog; such as text, content, and graphics are intended for educational purposes only. The Content is not intended to substitute for professional medical advice, diagnosis, or treatment. Always seek the advice of your healthcare provider.

This content is for informational and educational purposes only. It is not intended to provide medical advice or to take the place of medical advice or treatment from a personal physician. All viewers of this content are advised to consult their doctors or qualified health professionals regarding specific health questions or before beginning any nutrition, supplement or lifestyle program. Neither Dr. Genevieve Newton, publishers of this content, or Fringe, Inc. takes responsibility for possible health consequences of any person or persons reading or following the information in this educational content. All viewers of this content, especially those taking prescription or over-the-counter medications, should consult their physicians before beginning any nutrition, supplement or lifestyle program.